Ambassador of the UAE to the US, Minister of State

His Excellency Yousef Al Otaiba assumed his position as Ambassador of the United Arab Emirates to the United States of America in DC on July 28, 2008. 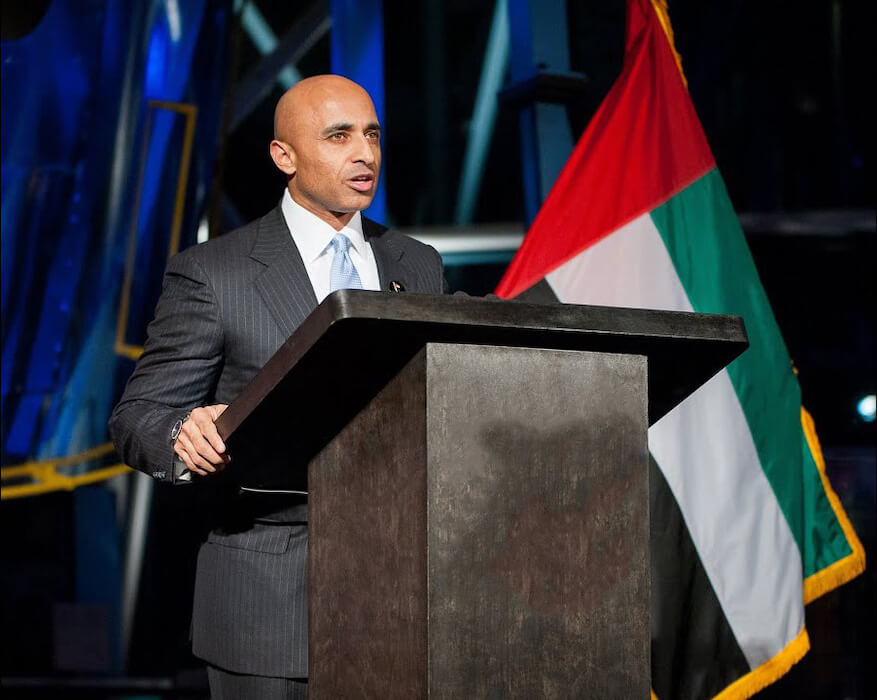 Since his appointment, Ambassador Al Otaiba has made a positive impact on UAE-US relations, strengthening bilateral security and economic cooperation, and increasing cultural understanding between the two countries. His leadership with this bilateral relationship has extended to his support of the UAE USA United campaign. As strong allies and close friends with shared interests and common values, the UAE and US work together to promote regional security, create economic prosperity and address worldwide challenges.

Ambassador Al Otaiba has led UAE efforts to increase defense and counterterrorism cooperation with the United States and other allied nations. He proudly represents the only Arab country to join the US on all six armed forces over the last 25 years, including the campaign against ISIS. Setting new standards for bilateral security around the world, he played a critical role in facilitating the landmark US-UAE 123 Agreement for Peaceful Civilian Nuclear Energy Cooperation in 2009. He also previously served as a board member for the EastWest Institute, where he worked with thought leaders to develop sustainable solutions to regional and global challenges.

As a major advocate for the region’s ongoing peace process, Ambassador Al Otaiba’s op-ed in Yedioth Ahronoth made headlines for addressing Israel’s plans to annex territory in the occupied West Bank. This publication ultimately laid the groundwork for the historic Abraham Accords, which were signed in September 2020 and marked the first step towards normalization of diplomatic relations between Israel and an Arab state in over 25 years. 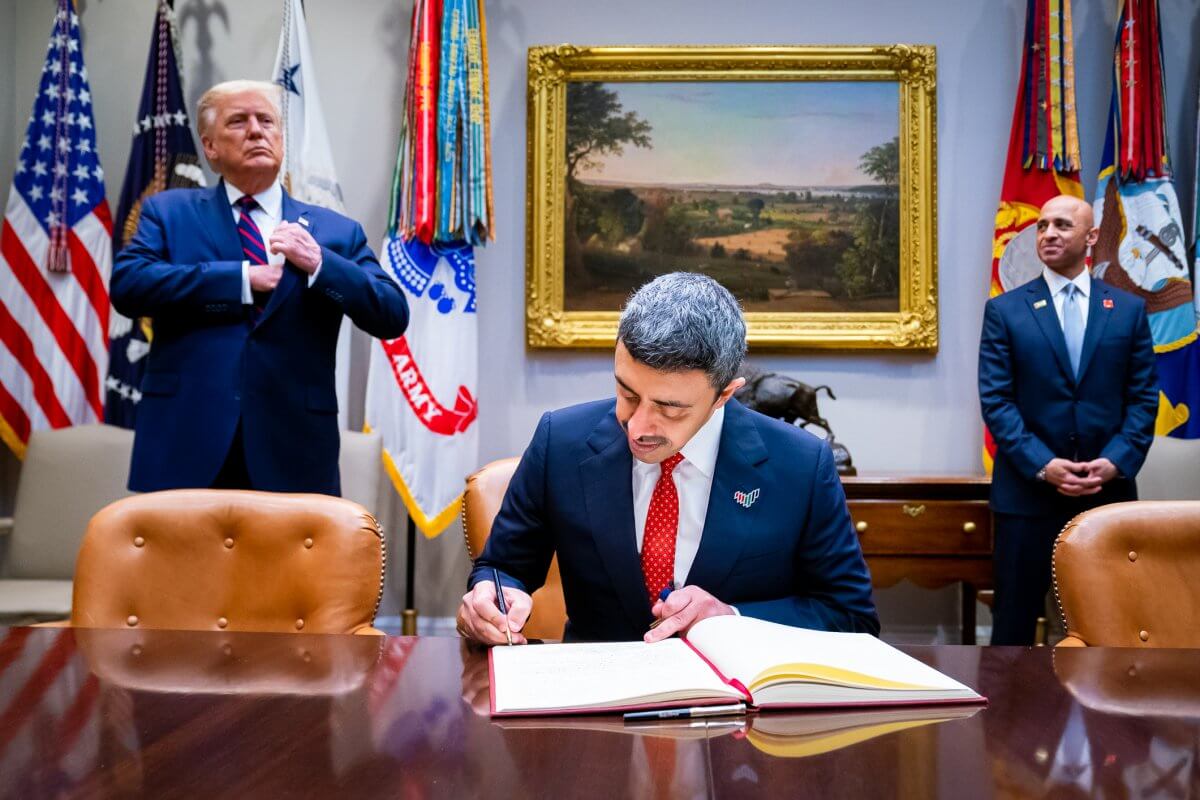 The Ambassador also works closely with his counterparts in government and with business leaders to promote greater UAE and US economic, trade and commercial ties. Since his appointment, bilateral trade increased significantly, solidifying the UAE’s position as the US’s largest trading partner in the Middle East and North Africa. During his appointment, UAE and US governments established a formal Economic Policy Dialogue and cooperated on ways to streamline travel between both countries.

He has also helped to expand UAE investments in the US, and establish partnerships with prominent US healthcare, education and cultural institutions, such as the Cleveland Clinic, New York University and the Guggenheim. The UAE funded several advanced academic programs including the Emirates Leadership Initiative at the Harvard Kennedy School of Government, where the Ambassador currently serves as a Leadership Council member. Furthermore, he has forged partnerships with several forward thinking organizations to create new opportunities for cultural exchange, including the Meridian International Center, which launched the first international tour of contemporary Emirati art in the United States.

Ambassador Al Otaiba spends time promoting inclusion and religious freedom worldwide. On behalf of the UAE Embassy he supported 2019’s “Year of Tolerance,” a movement to encourage peace, respect and acceptance across all cultures and backgrounds. That same year, Ambassador Al Otaiba joined the Board of Directors for the Special Olympics and played a key role in the initiative to host the World Games in the UAE capital, the first Special Olympics World Games held in the Middle East and North Africa. 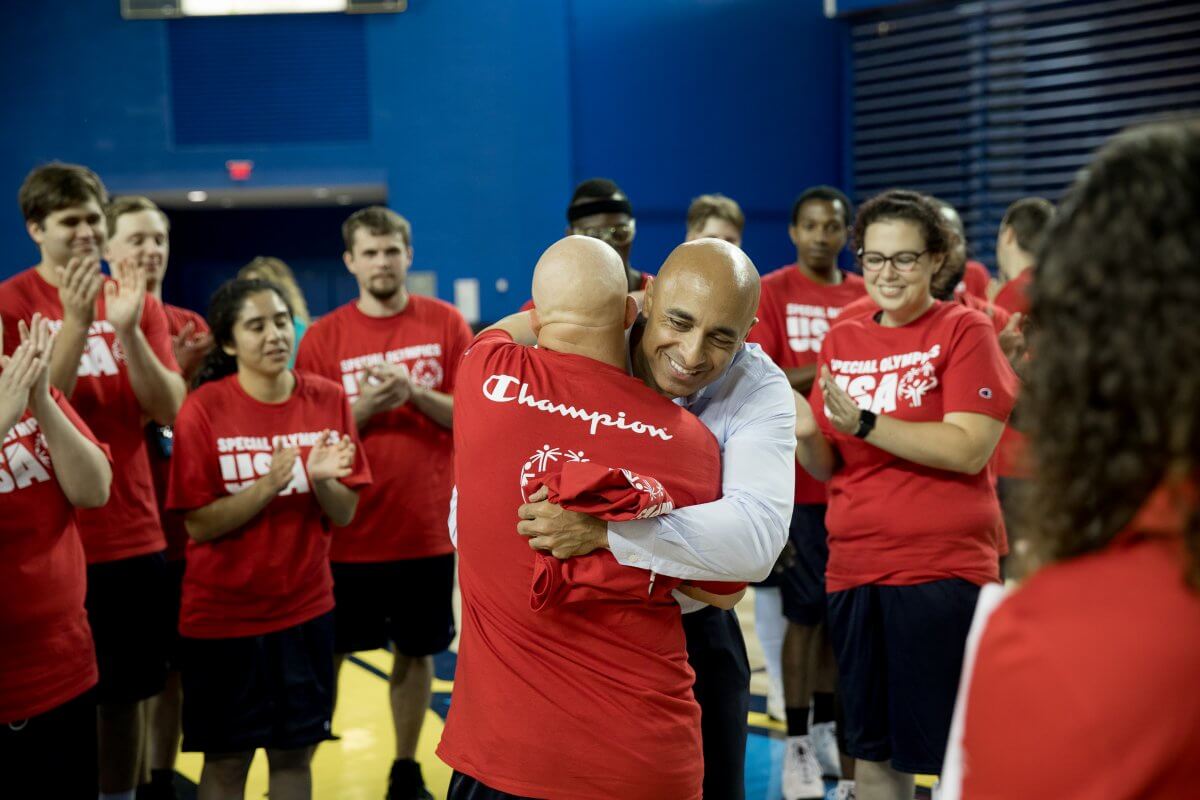 In addition to advocating for people of determination, his leadership directed the UAE Embassy towards a number of multicultural efforts, including a virtual interfaith discussion during the coronavirus pandemic. In February 2019, he supported Pope Francis’ three-day visit to the UAE to promote interfaith cooperation and foster peace and goodwill among the followers of the world’s religions. As the first-ever pontiff to step foot on the Arabian Peninsula, Pope Francis joined Grand Imam of Al Azhar in signing the Human Fraternity document for World Peace and Living Together and unveiled future plans to build the Abrahamic Family House in the UAE capital.

Ambassador Al Otaiba has also led the UAE’s significant commitment to philanthropic activities in the US. The program is predicated on preserving and advancing the strong relationship between the UAE and the United States. In 2009, he facilitated a transformational gift to launch the Sheikh Zayed Institute for Pediatric Surgical Innovation at Children’s National Medical Center in DC, and he has personally assisted Children’s National with its fundraising efforts. His passion for sports inspired the UAE Embassy’s Community Soccer program, which has constructed 11 soccer fields around the US to benefit kids in underserved communities.

Under the Ambassador’s leadership, the UAE Embassy’s urgent coronavirus response provided significant humanitarian relief throughout Washington, DC, and across the United States. Outside of his diplomatic endeavors, he and his wife Abeer Al Otaiba stepped forward to sponsor the Children’s National Hospital’s first drive-up COVID 19 test site and donated to local organizations delivering emergency food relief. He also provided assistance to aid in the reconstruction and recovery of US communities following natural disasters, including the states of New Jersey and New York following Hurricane Sandy in 2012 and the city of Joplin, Missouri, after one of the largest tornadoes ever recorded in national history devastated the town.

Ambassador Al Otaiba has also been a leading public voice for positive change across the globe throughout his professional career. As a role model for the Middle East community, he’s published op-eds in major publications, including CNN, The Wall Street Journal, Politico Magazine, The Washington Institute and The New York Times, among others. His writings have covered a wide range of topics, including the importance of tolerance and inclusiveness, counterterrorism efforts in the Middle East, cultural and technological partnerships around the world, and other policy matters and diplomatic endeavors.

In 2016, the Ambassador addressed NYU Abu Dhabi's graduating class and was presented with the university's Leadership Award for excellence in supporting the university and his dedication to advancing toward a responsible, just and peaceful world. Additionally, in recognition of his loyal service to the UAE and leadership in building closer ties with the US, he was honored by the National U.S.-Arab Chamber of Commerce as Ambassador of the Year in 2010, promoted to Minister of State in 2017 and named among TIME's 100 Most Influential People of 2020.

The Ambassador also hosts the UAE Embassy’s Podbridge Podcast and brings to light some of the biggest issues of today facing UAE-US relations, the Middle East and other areas of the world. Podbridge features conversations on progressive topics such as health, science, space, the environment, human rights and cultural diplomacy. Reflecting the Ambassador’s deep-rooted values, Podbridge is focused on inspiring international cooperation and thought-provoking dialogue between some of the best and brightest leaders around the globe.

He also previously served as a board member for the EastWest Institute, where he worked with thought leaders to develop sustainable solutions to regional and international challenges.

Before taking his current post, Yousef Al Otaiba served for eight years as the Director of International Affairs for the Crown Prince and Deputy Supreme Commander of the UAE Armed Forces, His Highness General Sheikh Mohamed bin Zayed Al Nahyan. The focus of his portfolio during this time was the strengthening of the UAE’s security and economic relations throughout the Middle East region, with the US and other nations. He also served as one of the UAE’s principal security, anti-terrorism and defense liaisons to other governments and was heavily involved in diplomatic efforts to enhance UAE enforcement of export control laws and policies, and the coordination of counter-proliferation activities with allies.

Ambassador Al Otaiba studied international relations from Georgetown University, after graduating from Cairo American College. He also attended the Industrial College of the US Armed Forces at the National Defense University as an International Fellow.