The United Arab Emirates has consistently and forcefully protested Iran’s illegal occupation of Abu Musa and the Greater and Lesser Tunbs from the moment Iranian military forces occupied the three islands on 30 November 1971, just two days before the establishment of the UAE.

The UAE first took this matter to the United Nations Security Council on 9 December 1971 because of Iran’s infringement of the sovereignty of the UAE and its violation of the UN Charter. At that time, the Security Council deferred action to allow the parties an opportunity to negotiate.  Since then, the UAE government has consistently sought a diplomatic resolution to this matter, calling to resolve the dispute through direct, meaningful negotiations or arbitration, or to submit the dispute to the International Court of Justice (ICJ) for final resolution in accordance with international law.

Fifty years after the initial invasion, the UAE still holds out its offer to Iran to resolve this dispute via one of the three options listed above; unfortunately, Iran has rejected such suggestions, and continues to refuse to discuss sovereignty over any of the islands. 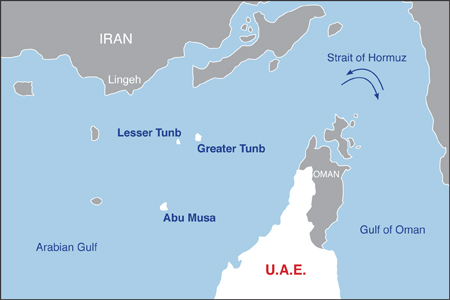 Unofficial map. For illustrative purposes only

US officials spanning multiple administrations have supported the UAE’s call for a negotiated settlement regarding the sovereignty of the occupied islands. The UAE appreciates the continued support of the United States and other members of the international community for reaching a resolution to the disagreement, and continues to make every effort to resolve the dispute peacefully and conclusively through the appropriate international channels.

More information about the historical context of the UAE’s sovereignty over the islands, as well as diplomatic steps the UAE has taken in an attempt to settle the disagreement, can be found in the fact sheet below.

Driven by our beliefs in dispute solving among countries, we, again, call on Iran to show its good will and enter direct and peaceful negotiations to settle the issue of our occupied islands, or agree to relate the case as a whole to the International Court of Justice, expressing our readiness to accept the ruling regardless of the results.