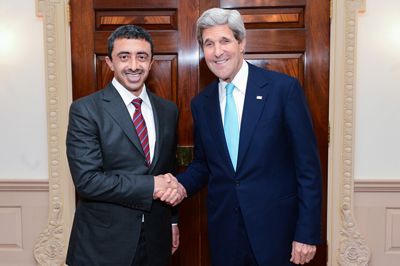 During his meetings with US policymakers, Sheikh Abdullah discussed regional matters, including the transition taking place in Egypt, the situation in Syria, efforts to resolve the Arab-Israeli conflict, and ways the UAE and US can further cooperate to deter regional threats of aggression in order to promote peace, stability and development in the Middle East.

Sheikh Abdullah briefed US Government officials and Members of Congress on the UAE’s efforts to support the Egyptian people during the current transition, and explored opportunities to work collaboratively with the US and other nations to help stabilize Egypt. In that regard, Sheikh Abdullah also discussed with US officials the threat posed by political Islamist and extremist groups that are undermining stability in the Middle East region by meddling in the affairs of other nations. 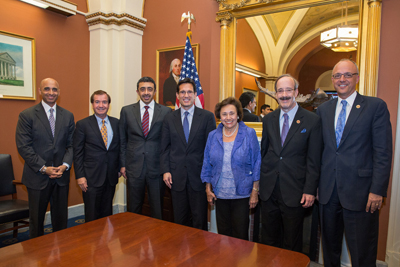 While meeting with the US Secretary of State, Sheikh Abdullah also applauded US efforts – particularly the personal and persistent role of Secretary Kerry himself – to restart the Israel-Palestine peace process and encourage both sides to resume negotiations, with the hope that a mutually acceptable solution can be reached with all parties.

During meetings with leaders from the US Senate and House of Representatives, Sheikh Abdullah shared the UAE’s perspective on developments in the Middle East region.  He also reviewed ways to enhance bilateral cooperation between the UAE and US with Congressional leaders, underscoring the deep military, security, economic and cultural ties that already exist between the two nations.

UAE Ambassador to the US His Excellency Yousef Al Otaiba joined Sheikh Abdullah in his meetings with the US officials. Sheikh Abdullah will conclude his visit to Washington, DC by visiting the UAE Embassy, where he will meet with UAE diplomats and lead a roundtable discussion for leading US foreign policy analysts.