Known as a “123 Agreement,” after Section 123 of the US Atomic Energy Act, the new pact establishes a required legal framework for commerce in civilian nuclear energy between the two countries. 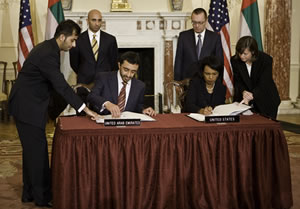 “This agreement will benefit both of our countries, and is another example of the strong relationship between the United States and the United Arab Emirates,” said Sheikh Abdullah. “Under the terms of this agreement, the UAE will gain access to significant capabilities and experience in the peaceful use of nuclear energy. This will allow the UAE to develop its civilian nuclear program to the highest standards of safety, security and non-proliferation. The agreement will also open opportunities for US firms to be active participants in the UAE nuclear energy program.“

The 123 Agreement follows the April 2008 signing of a Memorandum of Understanding on cooperation in peaceful uses of nuclear energy between the two countries.

The UAE released a detailed policy document on the evaluation and potential development of peaceful nuclear energy in April of last year. The UAE policy is based on the principles of complete operational transparency and the highest standards of safety, security and non-proliferation. The policy was developed following a study that projected massive increases in demand for electricity in the coming decades. The study determined that nuclear energy is a viable and compelling option for meeting the UAE’s future electricity demand.

These policy commitments include a pledge to forego any domestic fuel enrichment or reprocessing capability, in favor of long-term external fuel supply arrangements. Additionally, the UAE policy calls for close and continuous coordination with the International Atomic Energy Agency, as well as cooperation with the governments and firms of responsible nuclear supplier nations, including the United States.

The agreement signed today reflects the UAE’s policy commitments and meets or exceeds all of the guarantees and controls requirements of Section 123 of the US Atomic Energy Act. Various international experts have called the UAE’s program the “gold standard” approach to civil nuclear power development. Once signed, the executive branch forwards the agreement to the US Congress for review.

UAE and the Non-proliferation Regime: The UAE joined the Non-Proliferation Treaty in 1995, is an IAEA member, and cooperates with the Missile Technology Control Regime. The UAE is a partner-nation on the Global Initiative to Combat Nuclear Terrorism and a signatory to the Proliferation Security Initiative, which is aimed at stopping shipments of weapons of mass destruction, their delivery systems, and related materials worldwide.

The UAE supports the establishment of an international nuclear fuel bank under the auspices of the IAEA, as proposed by the Nuclear Threat Initiative. The goal of this international fuel bank is to help make nuclear fuel supplies from the international market more secure, by offering customer states in full compliance with their nonproliferation obligations reliable access to a nuclear fuel reserve under impartial IAEA control should their supply arrangements be disrupted. Financial commitments to the initiative have been made by the UAE, the United States, Norway and the European Union.

UAE Electricity Needs: The UAE has a critical need for new, clean, reliable sources of electricity. The national annual peak demand for electricity is calculated to more than double to 40,000 megawatts by 2020. Current, committed capacity can meet only half of this. After studying all viable forms of power generation, the UAE has determined that nuclear energy could make a significant contribution to meeting the electricity requirements of the UAE. As part of a diversified portfolio of power-generation assets, including renewable and traditional hydrocarbon energy sources, nuclear energy would free additional UAE hydrocarbon resources for the global market, reduce the UAE’s carbon footprint, assist in meeting the nation’s sustainability requirements, and provide a high degree of energy security for the UAE.

123 Agreement: A ‘123 Agreement’ refers to Section 123 of the U.S. Atomic Energy Act of 1954, which will provide the legal framework for peaceful nuclear energy commerce between the UAE and the US. The US has more than 20 such agreements in place, including with Egypt and Morocco.

More information is available at www.usuae123.org.

Press Releases, UAE US Relations
UAE Reaffirms Cooperation with the US and Global Partners to Counter Ransomware
November 4, 2022